In order to apply the generated custom styles to your template, please follow these steps:

Most household ants are nuisance pests. The sight of or presence of ants in food and drinks can be irritating. In addition, swarming of ants which may occur within the premises can be disturbing. Some ants, like fire ants, carry stings that can cause pustules and blisters, while others, like carpenter ants can nest inside wood structures and cause damage.

On the hand, ants are capable of being a mechanical vector of humans diseases too. As scavengers in kitchens and other food-handling areas, as well as garbage cans, dirty floors etc, they have the potential to transmit pathogenic organisms to humans. In addition, the Pharaoh ants have shown to cause contamination of surgical instruments and feed on wounds of patients in hospitals.  Ants live colonies and maintain a caste system. Each colony contains 2 types of individuals – Reproductive queens/males & Non-reproductive workers & immature. The worker caste is the most common caste seen by us.

Most household ants establish new colonies through budding. Budding is the process of movement of one to several queens with some workers carrying immatures to establish a new colony

Ants communicate chemically through pheromones, which are usually laid down onto travelling surfaces. The trail pheromone guides workers to food & water sources.

The food that ants eat is regurgitated again by workers to other workers, queens & males. This process of food exchange is called Trophallaxis, which plays an important role in baiting.

Cockroaches spread human disease by depositing disease organisms on food and utensils. The American cockroach, which comes into contact with human excrement in sewers or with pet droppings, may transmit bacteria that cause Salmonella and Shigella. German cockroaches are believed to be capable of transmitting disease-causing organisms such as Staphylococcus, hepatitis, and coliform bacteria. They also have been implicated in the spread of typhoid and dysentery.

Cockroaches may become pests in homes, restaurants, hospitals, warehouses, offices, and virtually any structure that has food preparation or storage areas. These pests are common even in the cleanest of crowded urban areas and older dwellings. It’s usually not difficult to discover an infestation, because they are often visible.

The typical signs of a cockroach problem are:

Seeing live insects – cockroaches are nocturnal and hide during the day. You will most likely see them when turning on the light in the kitchen at night

Damage - cockroaches will attack organic goods including leather and books

Rodents consume and contaminate food. They also gnaw on electrical wires, wooden structures, and tear insulation in walls and ceilings for nesting. Rodents can also transmit disease to humans, pets, and livestock. They have been found to transmit typhus, leptospirosis, trichinosis, and salmonellosis.

The presence of mice and rats is usually detected by the damage they cause to food and structures, by their droppings, and by their nests.

Dropping from a height of 50 feet doesn’t kill or seriously injure rats.

Roof rats are agile climbers and can shimmy the outside of three-inch diameter pipes or any size pipe within three inches of a wall. Rats are capable of climbing the inside of vertical pipes that are 1 1/2 to 4 inches in diameter.

Excellent balance allows roof rats to easily scale brick or other rough walls that offer footholds and to travel along power lines and ropes. Norway rats are good climbers, but they are not as agile as roof rats.

Since rats can fit through openings that are as small as 1/2 inch in diameter, it’s very difficult to rat-proof a building.

Water doesn’t stop Norway rats. They can swim as far as 1/2 mile in open water, dive through water plumbing traps and travel in sewer lines, even against strong water currents. Roof rats are capable swimmers, but only swim if necessary.

Mosquitoes are important as vectors of diseases whose scourge can disrupt the social and economic well being of a country. These include species belonging to the genera Anopheles, Aedes, Culex and Mansonia.

The most important disease transmitted by Anopheles mosquitoes is malaria, and some species also transmit filariasis. They breed in a variety of habitats ranging from brackish coastal waters to inland fresh waters especially marshes, rice fields, ditches, pools and ponds. They feed both on man and animals and lay eggs at night. Feeding and resting takes place either indoors or outdoors.

Aedes mosquitoes are vectors of dengue/dengue haemorrhagic and yellow fever and in some areas also transmit filariasis. They breed in natural and man made container-habitats such as tree holes, water pots and tyres. Aedes bite mainly during the day or early hours of the evening. Most biting occurs outdoors and adults rest outdoors before and after feeding, especially around human dwellings in urban and rural areas.

Culex mosquitoes are important vectors of encephalitis viruses (J.E). These mosquitoes breed mostly in ground collections of water such as pools, puddles, ditches, drains and rice fields. Many prefer waters polluted with organic debris. Culex species are mosquitoes that are associated with urbanization and towns with poor drainage and sanitation. Adults commonly bite at night and rest indoors before and after feeding.

The main medical importance of Mansonia is as vectors of Filariasis. They breed mainly in permanent collection of waters with floating vegetation to which the larvae and pupae attach their siphons and breathing trumpets to draw in air. Except for a fewspecies, adult Mansonia usually bites outdoors during the night and thereafter rests outdoors.

Flies are commonly found in close association with human dwellings. They are common in lowlands and highlands, particularly abundant in poultry, dairy, pigs and agriculture farms, dumping grounds and also slaughter houses

These flies are both a nuisance, repeatedly landing on people and food items, and a contributory factor in transmission of certain diseases such as cholera, dysentery and typhoid fever to people via food.

The housefly develop/breed in materials such as animal excrement, decaying lawn clippings, sewage, garbage, rotting vegetables & fruits and other decomposing organic matter. Flies can have a negative psychological impact because their presence is considered a sign of unhygienic conditions, especially in homes, restaurants, hotels and all other food outlets.

Flies are classified under the order Diptera and some of the common species found in Malaysia in association with house flies are:

We have the skills, experience and resources to manage the following:

It uses an insect growth regulator(IGR), Chlorfluazuron, as the active constituent in the Exterminex bait. Active termites feed on the highly attractive bait food source & translocate the IGR to other members of the colony, at levels undetectable by those termites, until the colony collapses.

The system uses a number of unique stations for In Ground & Above Ground interception of active termites.

Why Use MAXPRO Pest Control Service?

As an owner of the property or investment, you should always use MAXPRO Pest Control Services when dealing with termites. We recommend you should not attempt to treat the problem yourself OR use other non-professional outfits because:

Termites have the potential to significantly damage your investment as termites work 24 hours, thus a trained MAXPRO professional is needed to address the issue Termites management requires training and how to detect and locate termites. MAXPRO has Entomologist & other specialists who can do a quality job 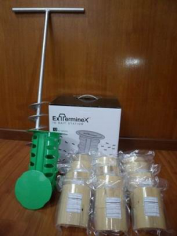